All Collections
Reporting
Campaign Reports
What are Facebook Breakdowns?

Whenever you're opening a Campaign Report tab, you will have the option to view a detailed report on how well it's performing.

First off, let's see where you can find them!

What's the difference between Facebook Breakdowns and Paragone Breakdowns?

Paragone Breakdowns will enable you to analyse data based on the audience you have created during the Campaign Creation. So whichever options you have selected will be displayed when you select them from the list below.

Now if you decide to use Facebook Breakdowns, you will get data directly from Facebook, meaning it's not limited by the options we gave you during the Campaign Flow. Basically, you can go on a deeper level with Facebook Breakdowns, without the pre-requisite of having created several ad-sets. 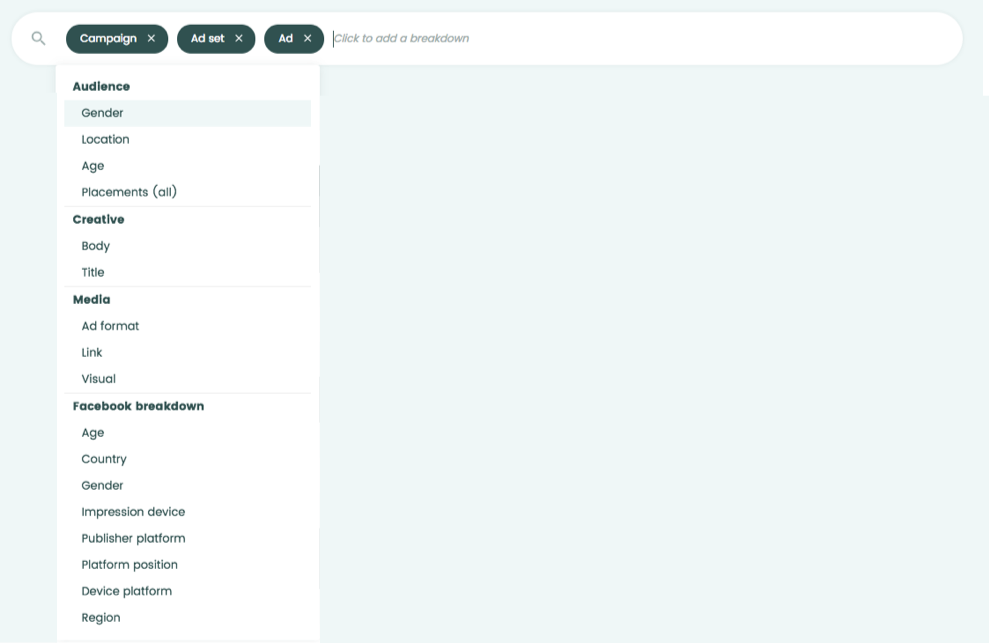 For example, if you want to know the repartition of clicks by age and you chose to use the Paragone Breakdowns, you would only see in your Ad-Sets how the stats look for the age bucket(s) you chose (if you chose 25-50 years old only, it would be limited to this). Facebook Breakdowns enable you to go deeper than this without choosing several buckets.

As you can see below, we are first filtering by ad set, from the audience creation, and then adding the age buckets from Facebook's data.

If we had only done by Paragone breakdowns, this is what we would have gotten:

As you can see we're limited to the 25-50 age range, which we had selected in the Audience Creation, whereas above there's a finer level of detail, coming from Facebook.

The drawback of Facebook Breakdowns is that there are situations where your request cannot be handled and you will not get the data you asked for. You can read more about this here!